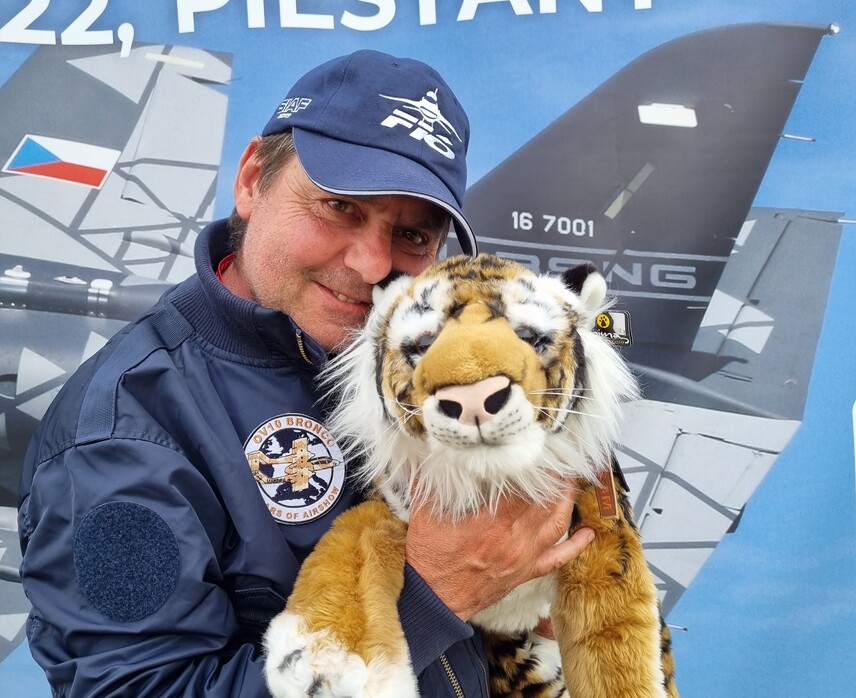 During his career, he was a reputable pilot who also flew the famous MiG-29 fighters. He became a member of the Slovak elite display team and performed his challenging maneuvers all over the world. Today, Ivan Hůlek is the executive director of the Slovak International Air Fest SIAF, which will take place as early as on August 27 and 28, 2022 at the Kuchyňa Airport in Malacky.

Ivan Hůlek is a two-time holder of the Superkings Trophy, which he won in 1995 and 1998 for his performance in the solo aerobatics of fighter jets at the largest European aviation event, the International Air Tatoo Victory Air Show in Fairford, England. After 38 years spent in the army, he decided for a well-deserved rest in his house overlooking the Sliač Airport. In the end, however, he allowed himself to be talked into the demanding position of the executive director of the Slovak International Air Fest SIAF, so he continues to deal with flying from the ground.

This summer is one of the hottest on record. Higher temperatures can also be expected during the last holiday weekend at SIAF. Is it hot for the pilot in the small space of the plane or are the planes equipped with air conditioning?

The planes are fully air-conditioned, but the pilots are "tied into a package" in them. It's quite a sweaty package when they have to stand in front of the runway in the blazing sun for several minutes because the air conditioning system starts to work at full capacity only when the engine speed increases.

When the MiG-29 fighter takes off, it is even possible that snowflakes fly in the cabin. It will surprise you the first time, but later on you won't forget it when setting the temperature. The audience often has no idea that the performance is physically demanding, and after eight minutes you're all sweaty.

Indeed, the average audience only sees the pilots in the air during performances. What does their normal routine look like during the air fest before they get on the plane?

The pilot usually checks with his team in the morning during breakfast if the plane is in order. They specify what their day will look like, when there will be a pre-flight briefing or transport from the hotel. At the briefing, he will then learn the performance time, weather information and other necessary details. He will tell his team when he wants the plane ready, and then it's up to him to fill the time.

Some pilots like to debate with others, others to walk around the airport, yet others to relax. They then take over the machine at the appointed time, report to the tower control, start the engines and then give their best performance during the demonstration. After the flight, the pilots and the team usually do a short debriefing, and if the plane is fine and nothing needs to be repaired, they can enjoy other parts of the program until departure.

How did you prepare on the day of the flight demonstration?

I watched the others. About an hour before the performance, I was already near the plane and flying with my hands.

Imagine the typical figurative "dance" when the pilot repeats in his mind the maneuvers he is about to perform.

So you had the demonstration planned in advance. Did you sometimes improvise in the air?

No. The flight is always firmly trained for the whole season and does not change during the season. There are usually two variants for good weather and bad weather. In addition, I had a selected maneuver in which I could change the direction of the demonstration according to the wind and the take-off direction, if it differed from the landing direction. However, I could not change the procedure.

You are a reputable pilot, you were part of the display team, into which it is not easy to get. What are the main differences that separate good pilots from the best ones?

After the split of Czechoslovakia, I was among the two probably most experienced pilots, and that's why I was included in the display team. At the same time, as one of the first fifteen, I had the opportunity to retrain to fly a MiG-29 fighter in Kazakhstan in 1989.

Good pilots are distinguished from the best pilots mainly by their instructors, but also by the pilots among themselves. During my era, at least, they were able to evaluate each other and highlight their qualities. That is very motivating. However, some things cannot be improved. Similar to sports, you can only improve your skills up to a certain limit through training. Everyone's limit is different. I had excellent pilots around me.

Was there a rivalry between them?

I didn't notice a rivalry. On the contrary, the pilots in my squadron were sometimes happy that they didn't have to fly anywhere, because especially the flights to foreign countries were very demanding.

You flew MiG-29 fighters for many years. What was special about them and what did you like about them?

It is simply a beautiful, strong and agile thoroughbred, which every aviation expert and fan looked up to. It was a plane that at that time finally equalized the performance of Western and Eastern planes.

People justifiably consider the profession of a pilot to be one of the most dangerous professions. After how much time of active flying did you get rid of your fear? Have you ever felt it in the first place?

No, I was never afraid of flying. I was afraid that I would not be able to do something at a sufficient level. Of course, I got scared more than once. There were situations when I trembled, but I was not afraid.

Have you experienced an accident or injury during your long career?

Fortunately, there have been none. I have had a few technical issues, but none has been life threatening. I admit that sometimes I got myself into situations that could have turned out badly. However, if you admit your mistake, you become a better pilot and bring lessons to others.

We on the ground only see the resulting perfectly trained aerial maneuvers. What is it like to practice a new sequence that the pilot has never tried before?

The first step is observation. The elements are chosen so that they are effective and your aircraft can handle them, because not all planes look the same during the same maneuver. The initial proposal of successive maneuvers is prepared so as to avoid "blind spots".

Experienced pilots can evaluate what the aircraft can do at specific speeds and g-forces. Subsequently, individual elements are successively tested, then series of elements and finally the entire sequence. Colleagues evaluate how this looks in the air. It is customary to make a video recording as well.

Thanks to this, even the pilot himself can look at the sequence and fine-tune the elements.

Exactly. In addition, the team measures the time and adjusts the sequence so that it lasts a maximum of eight minutes. Once the sequence is approved, it must be properly fine tuned. My generation of pilots can also be called "guinea pigs". We were lucky that in our era we could still invent and try things. This is not described or allowed anywhere in the manuals.

Physical training was organized within working hours, the rest was left to the pilots themselves and their discipline. A pilot's health and fitness is his bread and butter. The most important are a good cardiovascular system and performance.

As part of the training, they even often practice sports to develop coordination and explosiveness, such as hockey or football. Endurance disciplines are also common. In addition, with today's constant increase in the performance of combat aircraft, specialized training - both physical and psychological - becomes a necessity.

Was it the physical demands that attracted you to the pilot profession?

My profession choice was not romantic. I didn't know what piloting entailed. I passed the medical examination and at 18 I had no fear, life was sunshine and roses. My parents were more afraid. My father was also a soldier in Košice, but he was informed of my admission to the school just after the death of one of the local pilots. The father almost "got a heart attack".

Over time, I also realized the great risks of my profession, but also that the most dangerous factor is human error. There is no such thing as an infallible pilot, but he can eliminate the risk through training, checking and discipline.

Undoubtedly, demanding training and discipline are part of the pilot's profession even today. But what do you see as the biggest differences in the current work of display pilots compared to the past?

Today's pilots, too, are often away from home, flying on the edge and have no room for error because they maneuver near huge crowds of spectators. Colleagues are undergoing exercises or combat operations at home. Display pilots mostly have outages in classical training and an increased mental load during the season, from May to October, they have nowhere to ventilate. As in the past, it is an honor, but at the same time a difficult task.

When looking at pilots in the small space of a fighter jet, a number of practical questions come to mind for the average observer. What does a pilot do if he needs to go to the toilet during a long flight?

What John Glenn did in the Mercury capsule - he has to let it flow to the trousers. That is, unless he has an empty bottle, which he should not carry in the cabin for safety reasons. Airplanes with in-flight refueling may also have the option of defecating through a special tube in the pilot's equipment. This is unavoidable during transoceanic flights.

Are tall pilots, who may find it more difficult to fit into the small plane, at a disadvantage?

Not anymore. In the past, pilots were selected for MiG-21 aircraft based on their seat height, because of the design of the ejection seat. However, taller pilots have a physiologically lower g-force resistance. The distance between their heart and brain is greater and it is more difficult for the heart to supply the brain with blood. Modern airplanes have folded seats, which shortens this distance and increases the resistance of the pilot.